…It’s something about opening windows that have been long shut 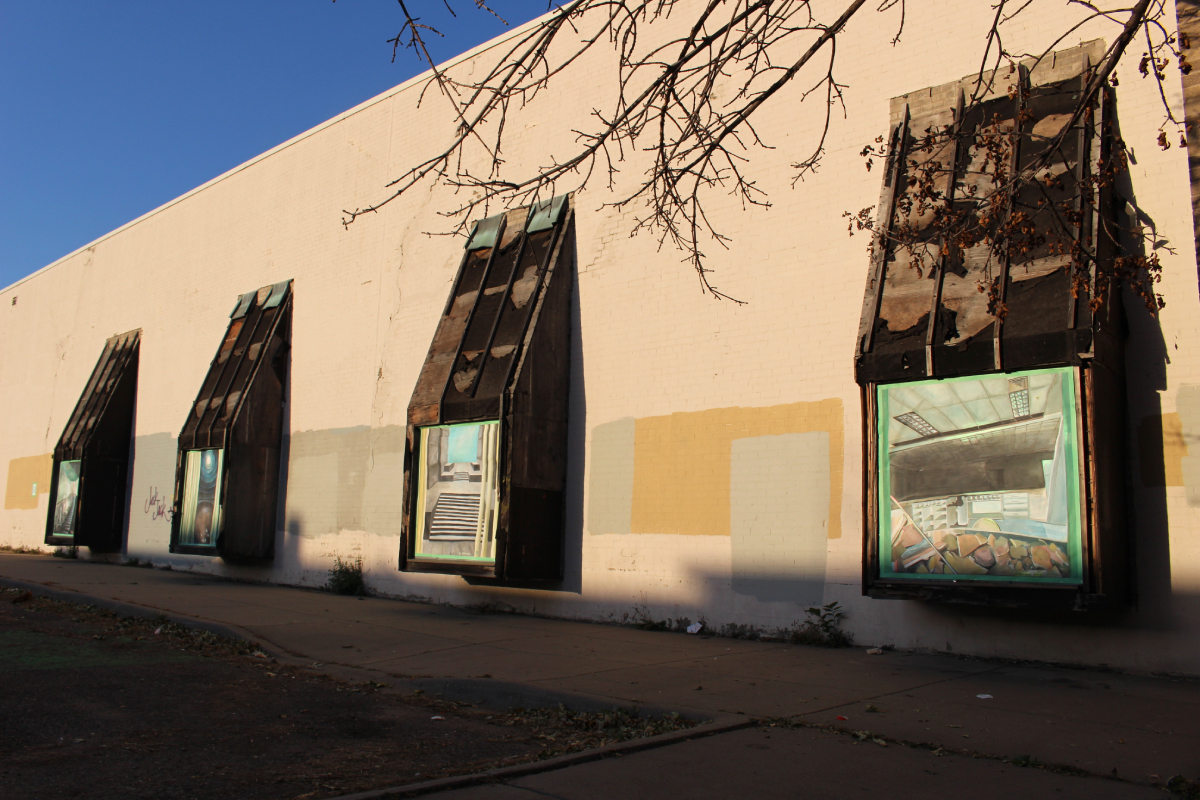 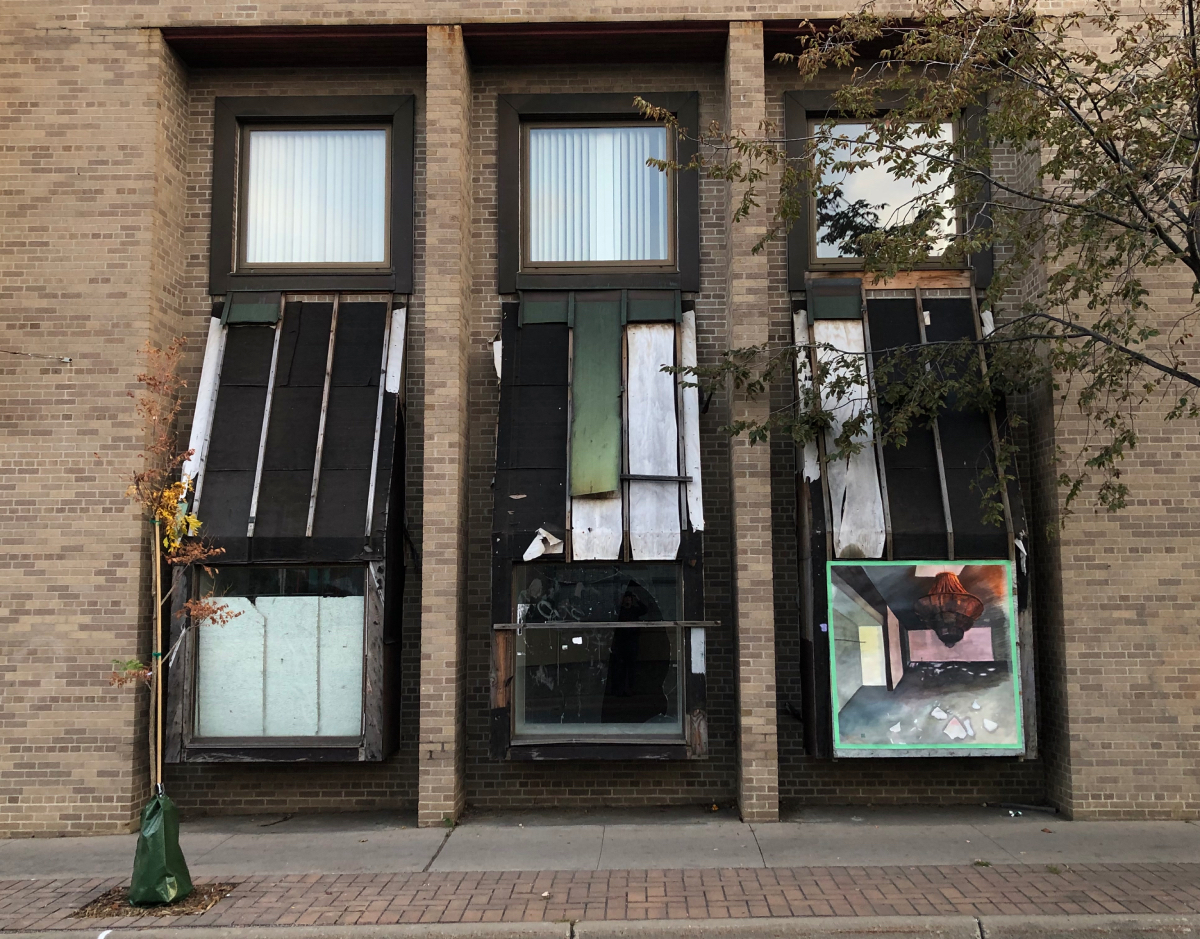 Claiming the strange, sad, falling-apart window-vestibules on a buzzing building with a history hard to define, lay down to rest (not the whole building, just the vestibules, but what those represent, the broken entrance points, the formerly framed emerald green slats, but now tar papered peeling, breaking portals to interiors that reach beyond rooms in the dark) (the whole building can be redone)

Reanimating the windows, opening them properly by peering into my/ourselves

Searching for the inside of a space, longing for unknown interior / a vantage point that i will knowingly never encounter

Searching for what layers look like between fact and fiction; where they dissolve into one place

There is nothing to be found, just sensed : dark interior that i’m only seeing through surmising and layering meaning

No, it’s none of those

You can only feel what it feels like when someone rips apart an old wooden window frame which will never exist again, a building from the 1940’s, for no good reason

Not for protest, not for shelter, not for George Floyd / just for the sake of breaking something; breaking open (or copper)

done as its own action, its own cadence / without blessing, a funding structure, organizational knowledge, or a proprietor

The labor of a durational painting practice, molded into daily realities that cannot be cast aside, 125 square feet of canvas, and the transportive moments where I am able to fleetingly live inside of that space through painting, enlivening

…..It Just happened in an extended moment, born from dreams and partial views of places.

A gesture, a dedication, a revision, a protective layer? 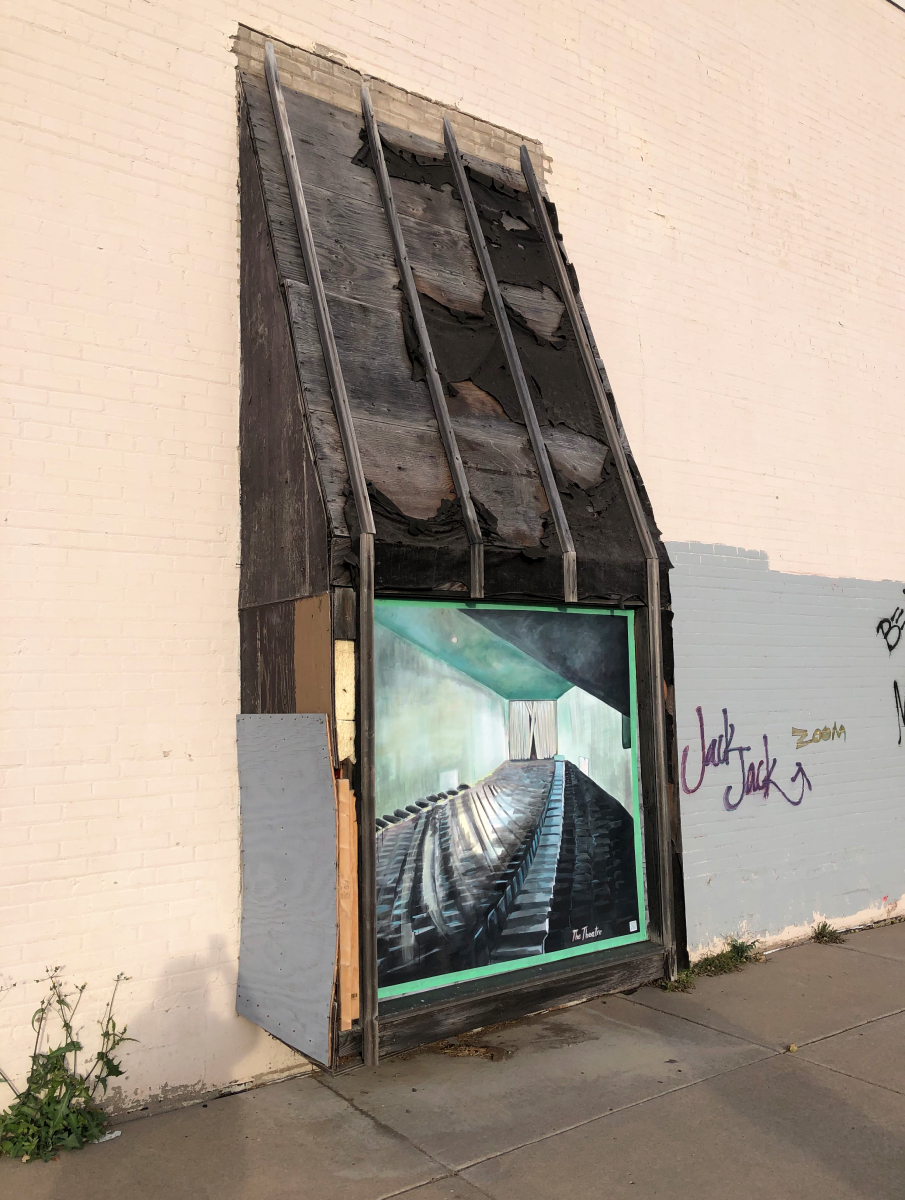 The first painting is the Theatre. I think this building used to have a theater in it called Center Theatre. There isn’t much to find about it. I’ve been so busy painting, but I hope to talk to an old person who knows more about this. Bent vertical blinds line the stage, and I have no idea what’s behind them.

I woke up one morning last winter after dreaming about a cold, dark, black and white theater with a big ledge on one side. In my dream, I heard the word “Victoria” over and over. I looked it up online immediately upon waking up, and was surprised to find the actual place a few blocks down on the other side of University, which I’d never heard of. The photo I used for the painting was maybe somewhere in London – I found the closest thing that looked like my dream, but was still called Victoria.

Turns out, later when I searched 1080, Victoria Theatre on university was the first hit. I don’t know what the relationship is between these places, but there is obviously something to it. I did not attend Northern Spark in early June, but just a couple weeks ago, I stumbled accidentally into Victoria Theatre, and it really did feel like the one in my dream.

But, Center Theatre used to exist in 1080, and I mean to find out more. It’s cool, quiet, and belongs on my constellation of places I enter in near-lucid dreams, which turn out to be clues or cues about the permeable layers between planes or realities. I wouldn’t have known any of this, had it not appeared randomly in a dream first. 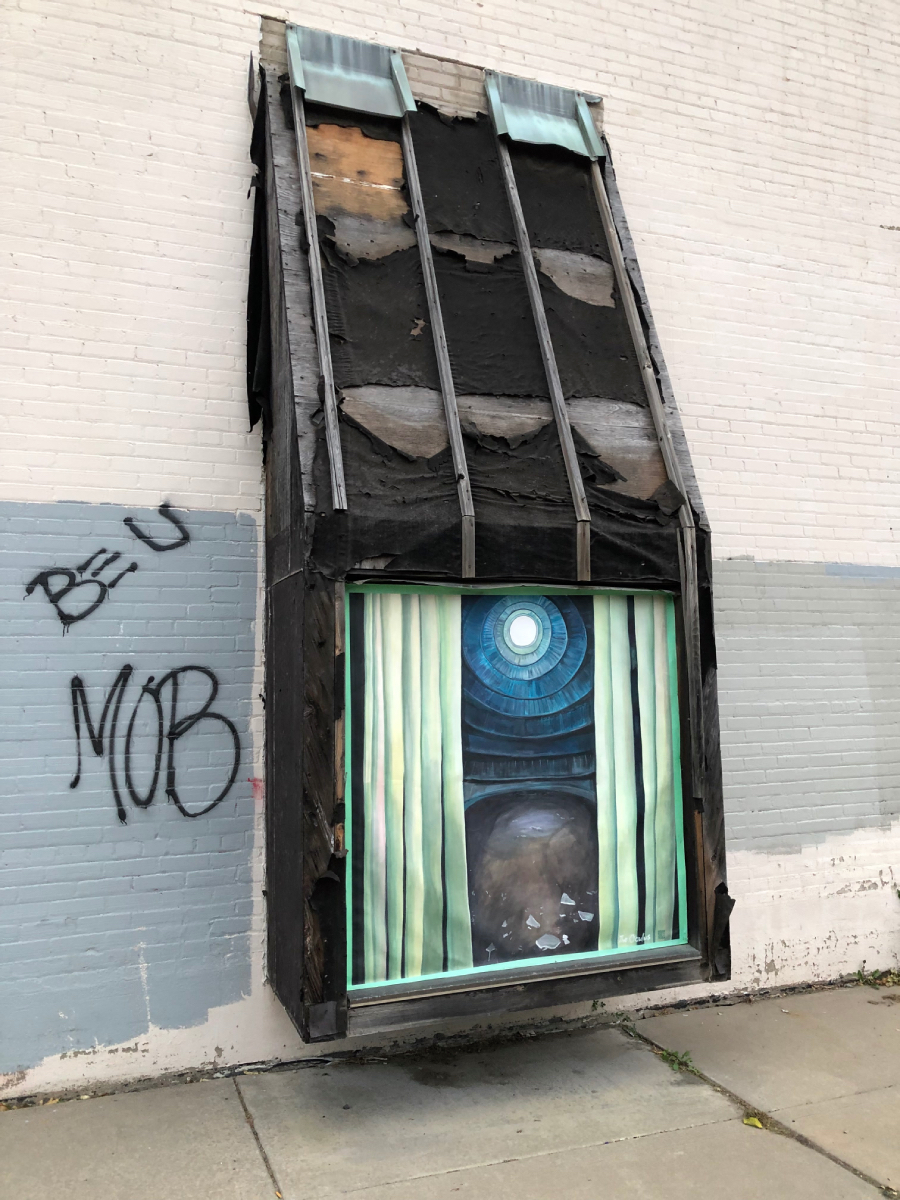 I imagine what it would feel like to enter the building and find myself standing in a towering space with a lonely skylight far above, bathing the room in a dim, milky light you can almost smell, where something is still living but mostly forgotten. A window within a window, the Oculous is a reference from Charleoi, an abandoned power plant in Belgium, which is about to be torn down, or is in process of. Maybe almost like this place. Unabashedly, I am filled with urbex FOMO.

The vertical blinds of 1080’s formerly operational windows now open to the ocular skylight, and the crumbled sheetrock takes on a magical quality in the diffused light, almost like being underwater, drawing you further in. 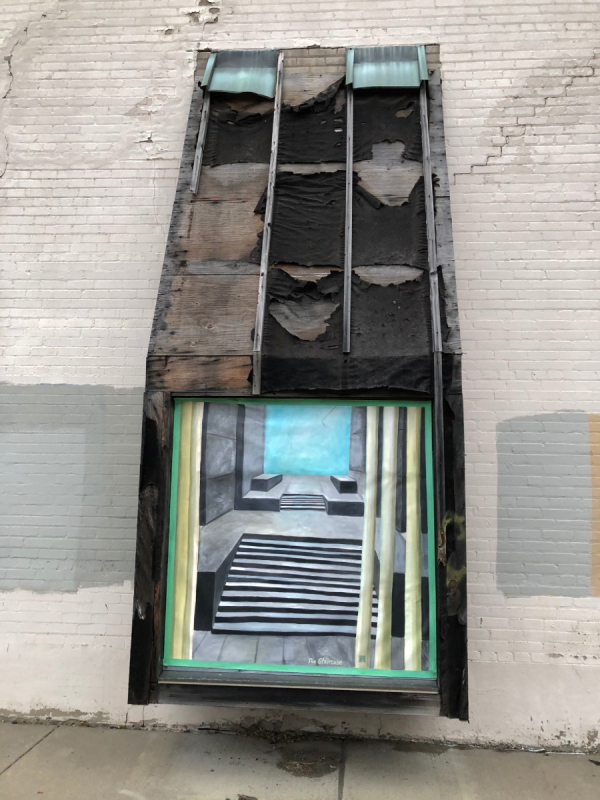 Vertical blinds are open a bit further on this window, allowing you to easily step into a sort of liminal utopic ascension point. The stairs are simple and easy to climb, and once you get to the blue part, you can fall right in. There is a pipe hanging, broken, off the ceiling, up on the second floor, visible in the square window from the parking lot….but that’s a small matter in the face of such pure and unemcumbered possibility, isn’t it?

The Staircase is a contemplation of the ubiquity of architecture through the centuries. 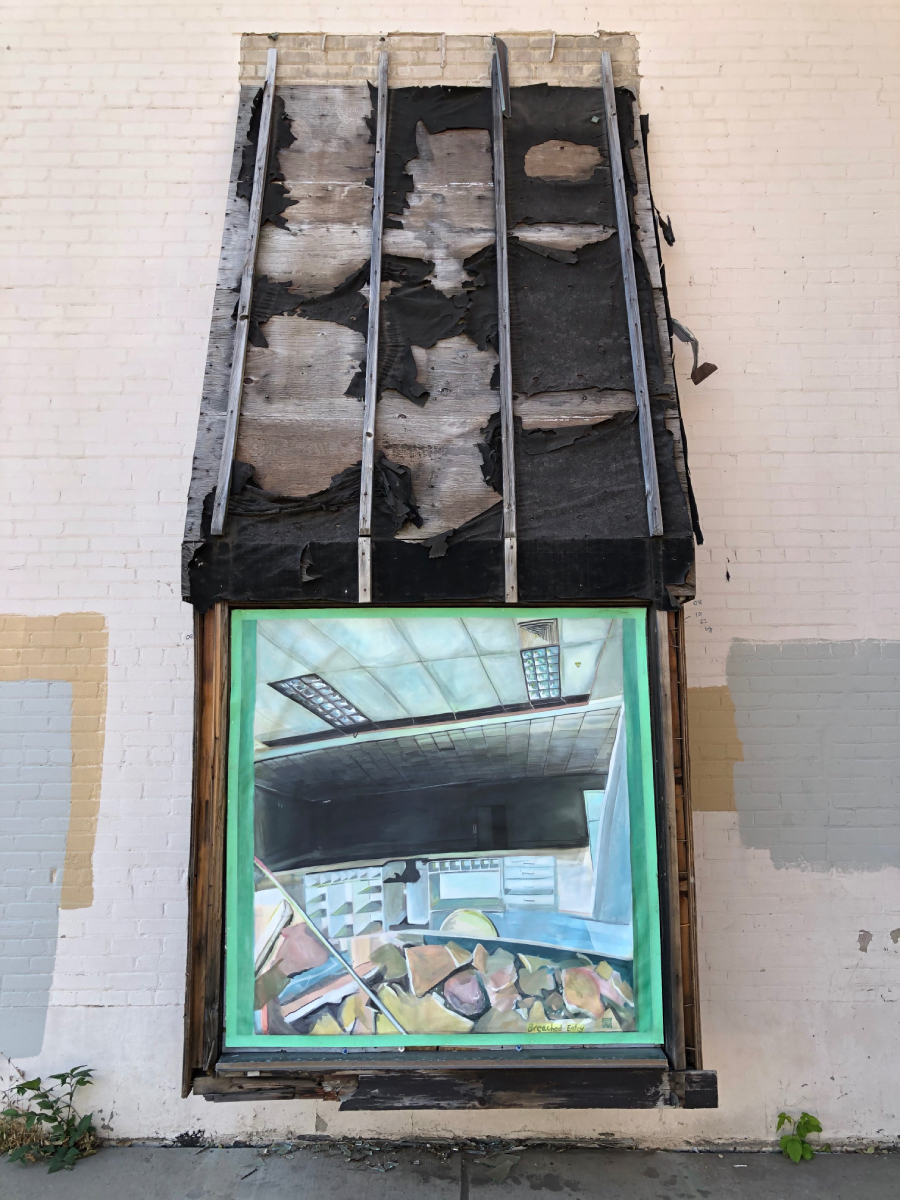 From the first side channel, you can’t see the chandelier yet (but around the corner, you’ll be able to.)

You can only see the forced entry and crumbled sheetrock

A white desk and its cubby holes, a folding metal chair

Lights with cords hanging down

I documented the Breached Entry point by wedging my torso under the plywood plank, so only my bottom half was exposed, and the rest of me was inside, inhaling the dust of the eras, but only for a split second.

9/3/22 On my mostly-daily drive-by, the same maroon car was parked in front of the broken vestibule. The breakage looked the same, but it still looked horrible. I wonder if anyone’s wondering why I go to this building every day. Looks like I’m not the only one. I’d really like to go inside more than anything, but I won’t go alone, and there’s nobody to join me.

9/7 i went out into the humid evening to the site. Thankfully the window was boarded up properly again. This is for aesthetic reasons, of course, but i didn’t like the disorder of it. I didn’t like the gaping hole, the small glass-filled portal and i didn’t like wondering who was going in and what they were doing in there. I was also jealous and tempted to go inside, but then I might risk not being able to install. 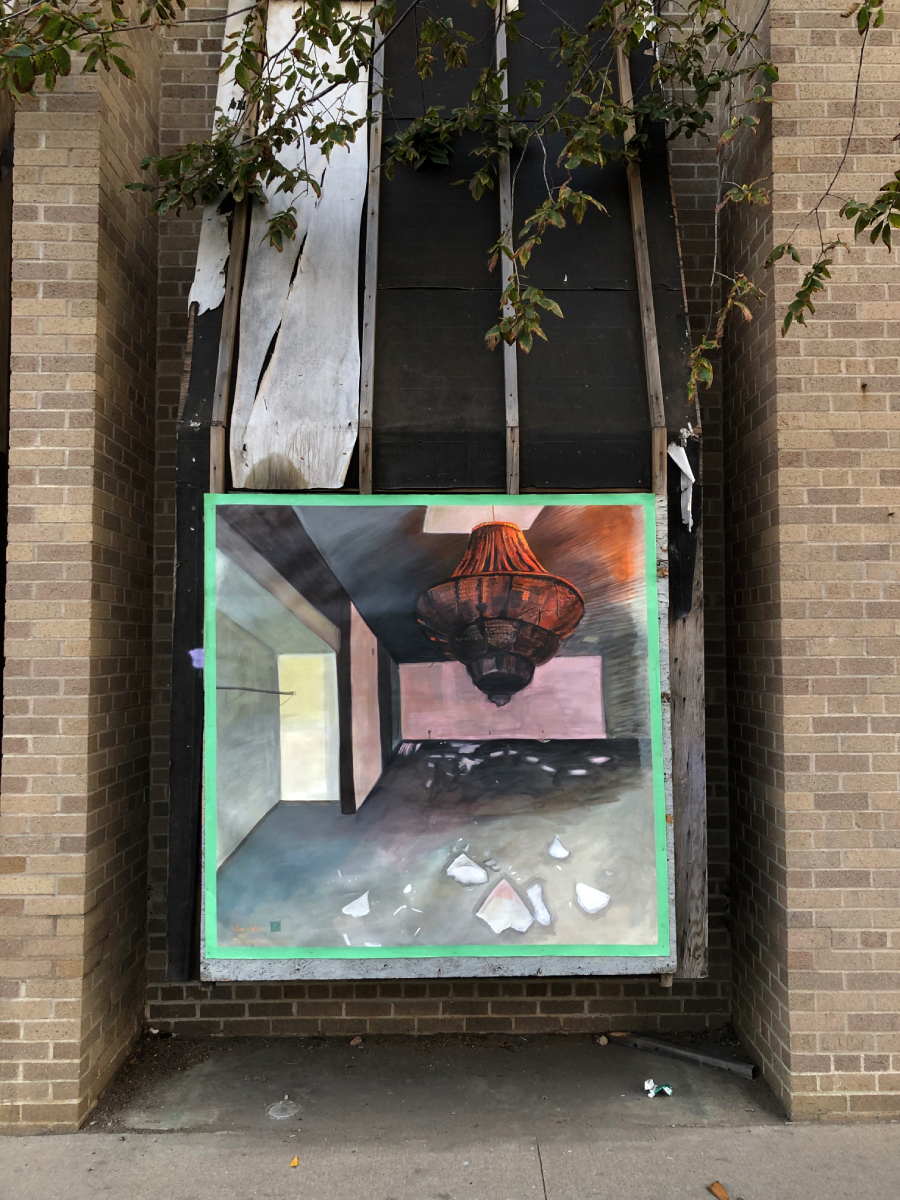 And there is a same strange site from a dream: a tall, such a tall dark room in Stara Zagora, Bulgaria; carpeted, rust red colored, large rectangular columns reaching to the ceiling, in the dark

I borrowed the chandelier image from that train station and put the view of it in that room, so you can see it from the train, but also be in that dream i had

The street-facing view of the Librarymuseum